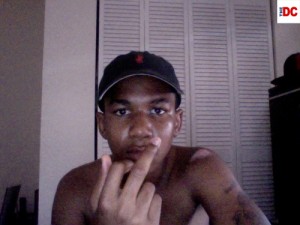 FLORIDA – The Daily Caller has identified a second Twitter handle that was used by the late Trayvon Martin during the last weeks of 2011. Tweeting in December under the name “T33ZY TAUGHT M3,” Martin sent a message that read, “Plzz shoot da #mf dat lied 2 u!”

This tweet, retrieved via the social analytics website PeopleBrowsr.com, shows the late Trayvon Martin tweeting a message that read, “Plzz shoot da #mf dat lied 2 u!” He was using the handle “T33ZY TAUGHT M3” near the end of 2011. (PeopleBrowsr/Twitter)

It’s unclear who Martin intended the message for, or whether he intended it to be taken literally.

The photo Martin chose to represent himself on Twitter as “T33ZY TAUGHT M3″ depicts him in a black Polo cap, looking into the camera and extending his middle finger. The photo’s file name on Twitter’s server indicates that it was taken on the afternoon of June 17, 2010.

At least one website issued a retraction this week after mistakenly linking Martin to a middle-finger-salute image on a Facebook account corresponding to a Georgia teenager who shares Martin’s name. This image, however, was uploaded to Twitter by the teen himself.

Although The Daily Caller has not confirmed with Martin’s family that the earlier Twitter handle belonged to the 17-year-old, there is significant evidence for the conclusion.

A basic Google search for “@T33ZY_TAUGHT_M3″ on Wednesday indicated that corresponds to a defunct Twitter account once used by someone named “Tray.” The same name, entered into the Google Images search engine, generated the photo of Martin flipping off the camera.

Upper-arm tattoos visible in that photo match those depicted in the Trayvon Martin’s MySpace page, which TheDC has also identified. That account includes numerous features, including photos of family members, indicating that it belonged to the slain teen.

This entry was posted on Thursday, March 29th, 2012 at 1:28 am and is filed under Florida. You can follow any responses to this entry through the RSS 2.0 feed. Responses are currently closed, but you can trackback from your own site.