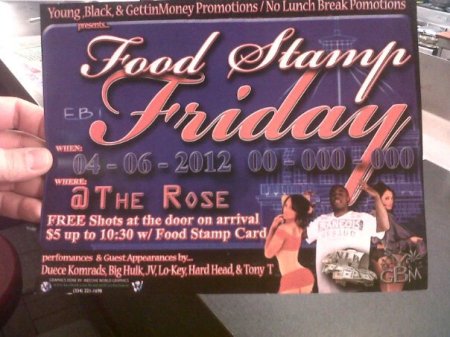 MONTGOMERY, ALABAMA – A nightclub in Montgomery, Ala. is raising eyebrows by hosting a “Food Stamp Friday” party on April 6 that seems to glamorize life on the federal government’s food assistance program.

An invitation for the April 6 party obtained by The Daily Caller tells patrons of the Rose Supper Club in North Montgomery that the Friday night cover charge will be just $5 if a “food stamp card” is shown upon arrival.

According to the flashy, postcard-size flier advertising the party, there will be “free shots at the door.” The announcement’s artwork mimics an Electronic Benefit Transfer card, the debit card used by Americans to redeem their SNAP benefits.

Glamorizing federal assistance bothers some who have seen the posters.

“I just don’t understand how they are promoting this without anyone saying anything about it,” Stephanie Pope, a Montgomery resident who has seen the fliers in gas stations, told TheDC.

Orlando Rogers, an employee who answered the telephone at the Rose on Thursday, confirmed that the “Food Stamp Friday” party is taking place at the venue next month.

Rogers said he wasn’t involved in the planning of the party, so he couldn’t comment on the event’s theme.

“It’s just a little party they’re having,” he said.

But another Rose employee had strong feelings about Food Stamp Friday, telling TheDC that he is not comfortable with the theme because it’s disrespectful.

Thomas said he knows of at least three phone calls placed to the venue complaining about the party’s theme. He said a young party promoter chose the name.

“I don’t know what these young people are doing,” he said.